Prisons in multiple states are phasing in tablets and e-books for inmates to use for media and communication. Though the devices aren’t explicitly intended to replace physical books, contracts between corrections departments and private prisons have coincided with attempts to ban book donations.

Since 2018, prisons in at least four states (Pennsylvania, New York, Ohio and Washington) have tried to implement bans on book donations, only relenting after public outcry, according to Reason.

The most recent contract between West Virginia Division of Corrections and Rehabilitation (WVDCR) and Global Tel Link provides 10 prisons in the state with multimedia tablets. Though WVDCR is not restricting donations on books, it does receive a 5% commission from the tablets. The agency says the funds will go toward expenses like cable TV and family visitations for the inmates. Inmates are charged per minute for use of the tablets.

In West Virginia, inmates earn between $0.04 and $0.58 an hour. An inmate earning $0.04/hr would have to work 6 hours to message or video chat, and 75 hours to earn one hour of reading. The tablets provided to WVDCR utilize a depository called Project Gutenberg, through which public domain digital books are accessible for free.

“Since Project Gutenberg archives older texts that have entered the public domain, they do not allow institutions to charge people to download their e-books and audio books. The per-minute tablet usage fees provide a clever way for GTL to profit from people reading ‘free’ books,” the Appalachian Prison Book Project wrote in a blog post.

A similar contract signed in August 2017 between JPay and New York State’s Department of Corrections earned the state over $9 million as of February of last year. 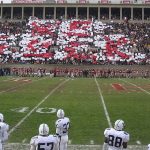 The scene of the "We Suck" placard prank during the 2004 Harvard-Yale annual football game. Photo by Jonathan Devor, Harvard-Yale 2004 game - We Suck, CC BY-SA 4.0
Prev Post 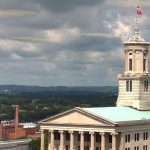