While most of us know some basics of African American history  — the mid-Atlantic slave trade, abolition, reconstruction, Jim Crow, and the civil rights era — there are some often-overlooked facts that escape most history books, so it’s highly unlikely that you learned about them in class. Here are a few little-known Black history facts:

For even more, check out an expanded list of Black History facts at PBS.org. 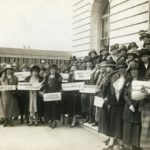