Despite what the history books have taught us, women have been shaping history for centuries. From the fight for gender equality to inventing computer programs still used today, these women paved the way for future generations. At a time when women were seen as less than men, they showed how smart and strong women could really be. Here are some great under-appreciated women who changed history:

There are still so many women to learn about in history and today. Take some time to research all the badass women from different backgrounds and eras who defined what it meant to be a feminist. Check out 100 Badass Women That Changed The World We Live In Today. 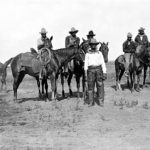