On Tuesday, January 6, a group of far-right Trump supporters stormed the U.S. Capitol Building in Washington, D.C. in an attempt to stop Congress from formally certifying Joe Biden’s presidential win in November. Their efforts didn’t stop Congress from certifying the election results, but in the process of breaching the Capitol, members of Congress were forced to evacuate, and at least four people died.

In contrast, a study from Princeton last year found that, of the 10,000 demonstrations that took place between May and August, 95% of them were peaceful.

Here’s how it all went down, from the threats of violence after the November 2020 election up to the bloody day.

Before the 2020 election: Trump claims voter fraud and election-rigging have been taking place for years—even before the 2016 election. Despite his win in 2016, he insists there was widespread voter fraud, undeterred by a lack of evidence.

November 7, 2020 — the presidential election: Biden wins the election and  Trump refuses to accept the results, launching 60 lawsuits (with the help of other Republican lawmakers) to overturn his defeat. His repeated claim that the election was “stolen” from him and his supporters riles up many in his base, and they begin organizing “Stop the Steal” rallies and groups.

November 2020—January 2021: Trump supporters hold several “Stop the Steal” rallies in the aftermath of the election and begin threatening state officials. On December 19, Trump tweets that there was to be a “Save America Rally” in D.C. on January 6, claiming it will be “wild.”

January 6, 6 AM: Protesters begin gathering near the National Mall, in preparation to hear speakers for the rally and march to the Capitol Building.

11 AM: As USA Today notes, the rally begins with the president’s sons Eric and Don Jr. speaking, as well as his lawyer, former New York City Mayor Rudy Giuliani. Around 11:50, Trump speaks, and then directs his supporters to march to the Capitol Building.

12 PM: Senator Josh Hawley (R-MO), one of the first politicians to vocally oppose Biden’s certification, raises his fist in support of the crowd as he walks into the Capitol Building.

1 PM: As the House of Representatives convenes to count Electoral College votes, protesters are met by U.S. Capitol Police on the steps of the Capitol.

1:30 PM: Police order the evacuation of the congressional office buildings near the Capitol, and moments later, the protesters breach the police blocking them and enter the building.

About 2:15 PM: Protesters scale the walls of the Capitol grounds, and around 2:40 PM, begin breaking windows.

2:22 PM: Vice President Mike Pence is escorted out of the Senate chamber.

2:44 PM: Shots are fired inside the Senate chamber as rioters move around inside the breached building.

3:34 PM: News reports emerge that a woman, later identified as Ashli Babbit, was shot in the neck. Police later confirm that she died.

3:51 PM: Hours after Mayor Bowswer requested the assistance of the National Guard, 1,100 troops are finally deployed.

4:17 PM: Trump posts a bizarre video in which he tells the mob at the Capitol that he loves them and that they are “very special,” while asking for them to stop storming the building. 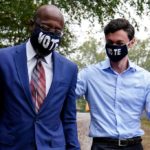 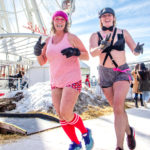