Xiao Zhen Xie was waiting for a traffic light on Market Street this Wednesday when a man, with no provocation suddenly punched her in the eye. Her first instinct? To grab a stick and hit him back!

Although Xie had some injuries, it was her attacker who ended up handcuffed to a stretcher and driven to the ER.

“The woman said that she was hit,” said Dennis O’Donnell, a bystander. “She attacked back. From what I could see, she wanted more of the guy on the stretcher, and the police were holding her back.” After defending herself, Xie cried out in Chinese, “You bum, why did you hit me?”

Xie, a San Francisco resident of 26 years, was also taken to a hospital for treatment and is recovering. She was later interviewed in her home with her daughter on the experience.

This wave of violence against the AAPI (Asian-American Pacific Islander) community, including the mass shooting that killed eight this week, can be traced back to a rise in xenophobic and anti-Asian rhetoric linking COVID-19 to China. The gunman in Atlanta, for example, targeted three Asian-owned spas. Six of the victims were Asian women, and it’s thought that the shootings were motivated by misogyny and racism.

Overall, hate crimes against Asian-Americans  have risen 150% in the last year, sparking calls for a statewide hotline and new laws to track and prevent the attacks.

If you would like to report an instance of an AAPI hate crime, visit stopaapihate.org. 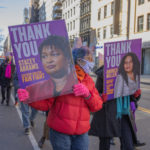 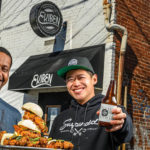